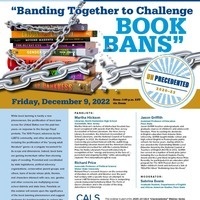 “Banding Together to Challenge Book Bans”

While book banning is hardly a new phenomenon, the proliferation of book bans across the United States over the past two years—in response to the George Floyd protests, The 1619 Project, advances by the LGBTQ community, and other developments, including the proliferation of the "young adult literature" genre—is a singular movement for its scope and dimensions. Indeed, book bans are gaining momentum rather than showing signs of receding. Promoted and coordinated by state legislatures, political advocacy organizations, conservative parent groups, and others, bans of books whose plots, themes, and characters intersect with race, sex, gender, and other concerns are multiplying across school districts and state lines. Panelists on this webinar will remark upon the significance of the book banning phenomenon and suggest strategies for banding together to redress the harm caused by it.

Martha Hickson’s defense of intellectual freedom has been recognized with awards from the New Jersey Association of School Librarians, the New Jersey Library Association, the American Association of School Librarians, and the National Council of Teachers of English. In 2022, the National Coalition Against Censorship presented Hickson with the Judith Krug Outstanding Librarian Award and the American Library Association presented her with the Lemony Snicket Prize for Noble Librarians Faced with Adversity in recognition of her “energy and bravery in the face of … persistent and ongoing hostility” while advocating for students’ First Amendment right to read.

Richard Price’s research focuses on the censorship of literature in schools and libraries over the past half century with a specific focus on attempts to censor LGBTQ-inclusive material. Price is completing a book manuscript tentatively titled The Perils of Queer Literature and is the creator of the blog Adventures in Citizenship.

Jason Griffith teaches undergraduate and graduate courses in children’s and adolescent literature. Prior to earning his doctorate in English education from Arizona State University, Griffith taught middle school and high school English in Pennsylvania public schools for twelve years, during which he was awarded the Outstanding Middle Level Educator Award by the National Council of Teachers of English (NCTE) in 2012. Griffith has served on a number of book prize juries including the Lee Bennett Hopkins Poetry Award and the Lynd Ward Graphic Novel Prize. Recently, he participated in an educators pilot program for The 1619 Project: Born on the Water children’s book and delivered a talk at TEDxPSU titled “Rethinking How We Read.”

Sabrina Evans, graduate student in the Departments of English and African American Studies at Penn State

After registering, you will receive a confirmation email containing information about joining the webinar.