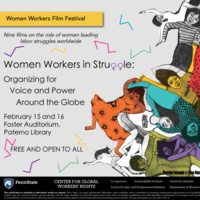 Women Workers in Struggle: Organizing for Voice and Power Around the Globe

The Center for Global Workers' Rights in Penn State's School of Labor and Employment Relations is hosting a two-day film festival. This event is cosponsored by the College of the Liberal Arts, the University Libraries, the Department of Women’s, Gender, and Sexuality Studies, and the Sustainability Institute.

This two-day film festival will be composed of documentary films that present a glimpse into the situations of women’s working lives across the globe, told in their own vivid voices. These films depict the exploitative nature of many of these industries, but importantly, they also show the politics of how women have fought for their rights at work, at home, and within broader civil society. The festival features films that portray a variety of global struggles of women workers, including the unionizing of sex workers in the United States, factory workers’ 510-day strike in South Korea, female farmers’ organizing in Brazil, the fearless women union leaders in Bangladesh garment factories, and the care workers’ struggle in Poland.

'UDITA' follows a turbulent half decade in the lives of women on the front line in the garment workers struggle in Bangladesh. From 2010, when organizing in the workplace would lead to beatings, sacking and arrests, through the tragedies of Tazreen and Rana Plaza, and to the present day, when the long fight has begun to pay dividends. We see this vital period through the eyes of the unions' female members, workers and leaders.

Joelina Maluto came to Canada after a in Hong Kong and the Middle East because “I heard Canada was a good country, and after two years I could bring my children here.” Instead, she arrived to find she had no job and was forced to live in her agent’s basement with 16 other nannies for the next 2 and a half months. When the agent finally got her a job, the employer forced her to work 18-hour days. Joelina was among several nannies brave enough to go public about their experiences in the hope of forcing change.

Strike A Rock is the story of two South African mothers and best-friends who formed a women’s organization, Sikhala Sonke (We Cry Together), after their friend Paulina was killed by police. They live in Nkaneng, Marikana, a rural informal settlement that became internationally known after the 2012 Marikana Massacre, when 37 striking mineworkers were killed by police. However, the living conditions that motivated the strike in the first place continue to worsen. And this is what the women are fighting against.

This is the story of longest factory sit-in by women–500 days–led by Rosa Giancola of Latina, and a factory that churns out sweets and thoughts, led by Margherita Dogliani of Carrara. The documentary recounts the story of two women who are very special and react in profound and non-conventional ways to the economic and moral crisis that grips Italy.

This documentary looks at the 1996-97 effort of the dancers and support staff at a San Francisco peep show, The Lusty Lady, to unionize. Angered by arbitrary and race-based wage policies, customers' surreptitious video cameras, and no paid sick days or holidays, the dancers get help from the Service Employees International local and enter protracted bargaining with the union-busting law firm that management hires. We see the women work, sort out their demands, and go through the difficulties of bargaining. The narrator is Julia Query, a dancer and stand-up comedian who is reluctant to tell her mother, a physician who works with prostitutes, that she strips.

This documentary was filmed over 3 years in China’s electronics zones Shenzhen and Guangzhou with lush cinematography and unique access. The film takes the audience on an 8000-mile journey to the world’s electronics factory floors, revealing the situations under which China’s youth population has shifted by the millions in search of a better life.

The Seeds portrays life trajectories of women farmers participating actively in agroecological movements in Brazil. They are protagonists of important social changes in the Brazilian countryside. Moreover, these women organize the movements themselves, autonomously, as social and political leaders that are questioning stereotypes of the social imaginary.

On the night of June 30, 2007, cashiers and salespeople of Homever, a superstore in South Korea, started to fight for their rights and to disclose issues regarding contract-worker protection laws. This was not only the first in-house picketing action by young women workers in history, but it also gave them an opportunity to seek a new ego as women. Their one-night picketing in the store turned into a 510-day strike. This long struggle revealed problems and limitations of the labor movement in Korea.

This is a film about the struggle of women who work in municipal kindergartens and nurseries in Poznań (Poland). They fight for living wages and better conditions for themselves and the kids. In 2011, the women set up a union section. Since then they have learned to put pressure on their employers effectively, and they have also supported other workers during their struggles.