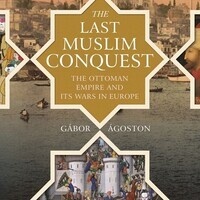 The Last Muslim Conquest: The Ottoman Empire and Its Wars in Europe

Between the fourteenth and seventeenth centuries, the Ottoman Empire conquered and ruled most of the European territories east of Vienna, establishing Muslim institutions and laws in the heartland of Christendom. In his new monumental book, prominent historian Gábor Ágoston revisits Ottoman westward expansion, arguing that Ottoman power rested not only on sheer religious fervor or military force, but also on law, diplomacy, intelligence gathering, and supply networks. Ágoston will introduce his book to the audience and explain how centuries of Muslim rule left their imprint in central and Eastern Europe.