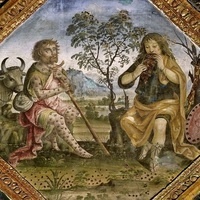 Reading Ovid Through Arab Lenses: The Story of Io in Alfonso the Learned’s General Estoria, with Juan Udaondo Alegre

Alfonso X of Castile (1252–1284) introduced episodes from Ovid’s Metamorphoses extensively throughout his ambitious historiographical project, the General Estoria (General history). Since he had to adapt pagan myths to fit a Biblical frame, Alfonso followed the pattern of contemporary Christian interpreters, who used three approaches or stages: historical/euhemeristic, allegorical/glossarist, and moralistic. However, elements appear in each of them that were unfamiliar to the Latin culture of his time and can only be explained through Alfonso’s translation endeavors from Arabic into Castilian. Therefore, the descriptions of illustrious men and women in Ovid’s story of Io do not adhere to other European models: they study the liberal arts, write books on the sciences, practice astrology and magic, and excel in good customs and courtly pursuits such as music and falconry. These components are particularly distinct in the figure of Mercury, who is an accomplished magician, musician, and expert in the trivium and quadrivium—skills that he uses along with his Arab-like alfange to kill Argus, and thus to allegorically educate the “bestialized” Io. Based on several allusions in the text, I suggest that Alfonso reframes Mercury as a personification of the ancient sage Hermes Trismegistus, epitome of Mediterranean cultural and religious syncretism. In essence, Mercury becomes a Hermes hispanus: a summary of the Islamic Christian, Jewish, classical, and Near Eastern intellectual traditions that converged in the Iberian Peninsula.