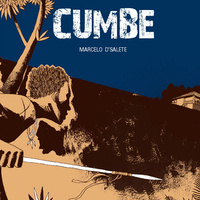 Marcelo d’Salete is an internationally recognized artist whose graphic novels about slavery and resistance have been translated into multiple languages. An art teacher, he holds an M.A. in Art History from the Universidade de São Paulo.

Cumbe (2014), which was translated into English as Run for It: Stories of Slaves Who Fought for Their Freedom (Fantagraphics, 2017), received the prestigious Eisner Award for the Best U.S. Edition of International Material in 2018. D’Salete’s epic Angola Janga – uma história dos Palmares (2018), was recently published in the U.S. as Angola Janga – Kingdom of Runaway Slaves (2019). Informed by years of his own original research, Angola Janga brings to light new dimensions of the history of Palmares, a maroon community in seventeenth-century Brazil that existed for nearly a century and at its peak is said to have had as many as 20,000 residents. This work has already been recognized with numerous awards in Brazil, including the Prêmio Jabuti. His other publications include the recently re-released Encruzilhada (2016), which focuses on urban life in contemporary São Paulo.