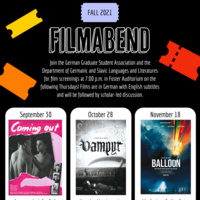 Join the German Graduate Student Association and the Department of Germanic and Slavic Languages and Literatures for film screenings at 7:00 p.m. EDT in Foster Auditorium (102 Paterno Library) on the following Thursdays! Films are in German with English subtitles and will be followed by scholar-led discussion.

Thursday, September 30: Coming Out
A young teacher in East Berlin struggles with accepting his homosexuality.

Thursday, October 28: Vampyr
A traveler with an interest in the occult must break the curse of a vampire.

Thursday, November 18: Balloon
A family tries to flee from East to West Germany while the state police are chasing them.