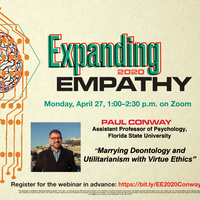 Abstract: For millennia, philosophers and scientists have debated whether morality primarily entails rational or emotional processing, while engaging in a second debate regarding whether to focus on the morality of specific actions versus the moral tendencies of individuals. Across 15 studies (N ~ 5000), I will aim to reconcile these debates by suggesting theoretical integration: people who tend to be most moral (virtue ethics) demonstrate a balance of affective and cognitive processing, which leads them to a balanced consideration of utilitarian and deontological ethical concerns at the level of individual moral decisions. People balancing affective with cognitive processing demonstrate increased prosociality and reduced antisociality on a variety of measures. Neither an absolute focus on rationality nor emotionality, nor on exclusively deontological or utilitarian concerns, is associated with enhanced morality. Such findings require a conceptual overhaul of moral dilemma research and clarify the psychology of moral excellence.

Bio: Paul Conway is Assistant Professor of Psychology at Florida State University and received his PhD from the University of Western Ontario in 2013. I study the psychology of morality and justice: How people think about good and bad, right and wrong, and whether to help or harm others. Some of my work examines the surprisingly complex ways that moral self-perceptions influence prosocial behavior. Doing so not only advances theory, but also suggests simple techniques for encouraging prosociality--for example, try reminding a friend of something good they did over a year ago and they will be more likely to help you today. For my dissertation, I applied a technique called process dissociation to moral dilemma decisions where causing harm maximizes outcomes. This procedure independently estimates the roles of affective reactions to harm versus cognitive evaluations of outcomes in moral decision-making, thereby clarifying several conundrums in the field. Currently, I'm developing a model of individual differences in moral judgment, and examining how morality impacts person perception. I won the 2014 Dissertation Award from the Society for Experimental Social Psychology, the 2014 Governor General's Academic Gold Medal, and the 2013 Student Publication Award from the Society for Personality and Social Psychology. My work primarily focuses on two streams. First, I aim to clarify conceptual confusion regarding the processes underlying moral dilemma judgments where causing harm maximizes outcomes. This work involves techniques such as process dissociation, as well as a new model of individual differences in moral thinking styles. Second, I am increasingly interested in social perceptions of moral judgments—how and why people react to others' moral judgments, and how people adjust moral judgments to present themselves in socially optimal ways. Beyond that, my interests are wide-ranging, including work on prosocial behavior, self-sacrifice, religiosity, cultural differences, social rejection, self-control, regret, and political decision-making.

Please register for free at the following link:

Register
​
Return to Top ​
This event content is powered by the Localist Community Event Platform.