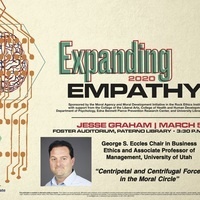 Title: Centripetal and Centrifugal Forces in the Moral Circle

Abstract: The idea of the moral circle pictures the self in the center, surrounded by concentric circles encompassing increasingly distant possible targets of moral concern, including family, local community, nation, all humans, all mammals, all living things including plants, and all things including inanimate objects. I present the idea of two opposing sets of forces in people’s moral circles, with centripetal forces pulling inward, urging greater concern for close others than for distant others, and centrifugal forces pushing outward, resisting “drawing the line” anywhere as a form of prejudice and urging egalitarian concern for all regardless of social distance. This centripetal/centrifugal forces view is applied to current moral debates about empathy (e.g., parochialism vs. universalism) and about politics (e.g., nationalism vs. globalism). I argue that this view helps us see how intercultural and interpersonal disagreements about morality and prejudice are based in intrapersonal conflicts shared by all people.

Bio: Jesse Graham is George S. Eccles Chair in Business Ethics and Associate Professor of Management in the Eccles School of Business at the University of Utah. Jesse studies the moral, political, and religious convictions that cause so much conflict — within and between individuals and organizations — and yet provide so much meaning to people’s lives. Jesse has received the SAGE Young Scholar Award and the Association for Psychological Science Rising Star Award, and has been funded by the National Science Foundation and the John Templeton Foundation.