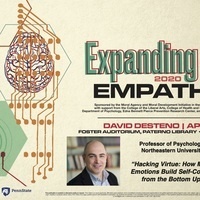 Title: Hacking Virtue: How Moral Emotions Build Self-Control from the Bottom Up

Abstract: The ability to delay gratification, to value the future more than the present, is a key ingredient for success. It’s what allows us to study or work hard rather than throw in the towel, be generous and fair as opposed to unethical and selfish, to invest for the future rather than spend on immediate pleasure. Yet the ways we’re taught to cultivate the ability for self-control – to rely on willpower and rational planning – not only don’t work well, but also result in anxiety and stress.  I’ll offer scientific evidence for a better route to success – one that leverages the power of moral emotions like gratitude and compassion. I’ll show how these emotions, by guiding our brains’ predictions about what’s likely to happen next and what we should value, impact our economic, social, and ethical decisions for the better.

David DeSteno is Professor of Psychology at Northeastern University.

At the broadest level, his work examines the mechanisms of the mind that shape vice and virtue. Studying hypocrisy and compassion, pride and punishment, cheating and trust, his work continually reveals that human moral behavior is much more variable than most would predict.

David is a fellow of the Association for Psychological Science and the American Psychological Association, for which he served as editor-in-chief of the journal Emotion. His work has been repeatedly funded by the National Science Foundation and has been regularly featured in the media, including The New York Times, The Wall Street Journal, CBS Sunday Morning, NPR's Radiolab and On Point, and USA Today.

He is the author of Emotional Success, The Truth About Trust, and co-author of The Wall Street Journal spotlight psychology bestseller Out of Character. He frequently writes about his work for major publications including The New York Times, The Atlantic, Harvard Business Review, Pacific Standard, and Mother Jones.

David received his Ph.D. in psychology from Yale University.