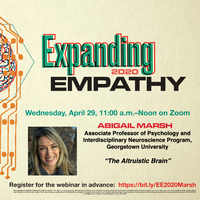 Abstract: Every year in the United States, over 100 Americans donate one of their own kidneys to a stranger. Dozens more receive the Carnegie Medal for heroism for rescuing strangers from danger. The question is: why? What drives people to take risks and make sacrifices to help strangers? Our work includes behavioral and brain imaging research aimed at understanding the roots of extraordinary altruism. Results of our research suggest that extraordinary altruists possess neural and cognitive characteristics that predispose them to high levels of care and compassion. In terms of their brain structure and function, they look the opposite of highly callous individuals (such as psychopaths). They also show unusually strong connections between brain areas that support parental care. These variations may increase altruists’ capacity for empathic responding and bias them toward protective responses to others’ distress. Together, these results suggest that extraordinary altruism may result from variations in established neural and cognitive phenomena that support social and emotional responsiveness. They also suggest that human altruism may be subserved by ancient neural systems that support parental and alloparental care.

I am an Associate Professor in the Department of Psychology and the Interdisciplinary Neuroscience Program at Georgetown University. I received my PhD in Social Psychology from Harvard University in 2004 and afterward conducted post-doctoral research at the National Institute of Mental Health until 2008.

I direct the Laboratory on Social & Affective Neuroscience, research in which is aimed at addressing questions that include: How do people understand what others think and feel? What drives us to help other people? What prevents us from harming them? We tackle these questions using multiple approaches that include functional and structural brain imaging in adolescents and adults from both typical and special populations, as well as behavioral, cognitive, genetic, and pharmacological methods. Current research projects include behavioral and brain imaging investigations of altruism among living altruistic kidney donors and stem cell donors, and behavioral and brain imaging investigations of the roots of conduct problems in children and adolescents.

Please register for free at the following link:

Register
​
Return to Top ​
This event content is powered by the Localist Community Event Platform.