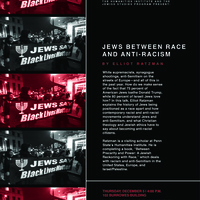 White supremacists, synagogue shootings, antisemitism on the streets of Europe --and all of this in the past year. How do we make sense of the fact that 75% of American Jews loathe Donald Trump, while 80% of Israeli Jews love him? In this talk, Elliot Ratzman explains the history of Jews being positioned as a race apart and how contemporary racist and antiracist movements understand Jews and antisemitism, and what Christian theology and Jewish ethics have to say about to become antiracist citizens.

Elliot Ratzman is a visiting scholar at Penn State University's Humanities Institute. He is completing a book "Between Precarity and Power: A Jewish Reckoning with Race" which deals with racism and antisemitism in the US, Europe, and Israel/Palestine.