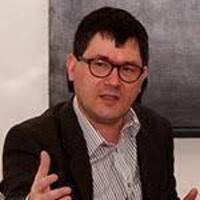 "Beyond Circulation: World Literature and the Problem of the Text"

Galin Tihanov is the George Steiner Professor of Comparative Literature at Queen Mary University of London. He is the author of five books, most recently The Birth and Death of Literary Theory: Regimes of Relevance in Russia and Beyond (Stanford UP, 2019) which won the 2020 AATSEEL Prize for "Best Book in Literary Studies". His co-edited volume A History of Russian Literary Theory and Criticism: The Soviet Age and Beyond (2011) won the 2012 Efim Etkind Prize. His work in intellectual history and on cosmopolitanism, world literature, and exile has been widely translated. He is currently completing Cosmopolitanism: A Very Short Introduction for Oxford UP.  Peking UP is preparing a volume of his selected articles on cosmopolitanism, exile, and world literature in Chinese translation. Tihanov has been elected to the British Academy and to Academia Europaea.