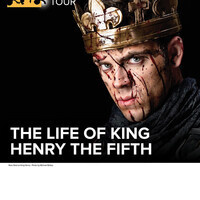 American Shakespeare Center on Tour presents: The Life of King Henry the Fifth

Donations welcomed at the door.