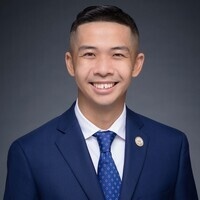 “Representation Matters: My Role in Getting Community Voices Heard, Amplified, and Addressed” A talk by Adrian Tam