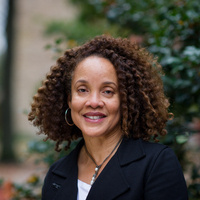 Acclaimed historian Dr. Tera Hunter of Princeton University will deliver a public talk Friday, September 20 In Paterno Library's Foster Auditorium to kick off Women's Rights and the Post-Civil War World, a workshop commemorating the centennial of women's suffrage in the United States. Dr. Hunter's talk will be followed Saturday, September 21 by a workshop on the myriad women's rights movements that emerged in the post-Civil War era, fighting for a variety of rights and equal treatment beyond merely the right to vote. Additional event details can be found on the Richards Center website.

Dr. Hunter's talk is titled, "'Confronted by Both a Woman Question and a Race Problem': African American Women, Slavery, and Post-Civil War Rights." A scholar specializing in labor, gender, race, and southern history, she is the Edwards Professor of American History and Professor of African-American Studies at Princeton. Her scholarship has earned numerous accolades and awards. Her most recent book, Bound in Wedlock: Slave and Free Black Marriage in the Nineteenth Century (2017) earned the Stone Book Award from the Museum of African American History, the Mary Nickliss Prize from the Organization of American Historians, the Joan Kelly Memorial Prize and the Littleton-Griswold Prize from the American Historical Association, the Willie Lee Rose Book Award from the Southern Association of Women’s Historians, and the Deep South Book Prize from the Frances S. Sumersell Center for the Study of the South. It was also a finalist for the Lincoln Prize, awarded by Gettysburg College and the Gilder Lehrman Institute.

Dr. Hunter actively seeks to engage the broader public with her research and scholarship. She has engaged in public history projects as a consultant for museum exhibitions and documentary films and worked with public school teachers. Additionally, she has written op-eds for the New York Times, Washington Post, and other media outlets with an eye toward demonstrating how history can help us understand the world we live in.

Conference is free and open to the public.