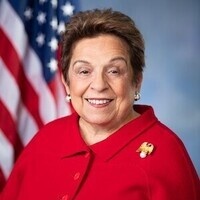 Donna Shalala: The Future of the Democratic Party

Political leader and scholar Donna Shalala will join us to discuss the relationship between the Democratic Party’s moderate and progressive wings, and what it means for American democracy moving forward.

Shalala has more than forty years of experience as an accomplished scholar, teacher, and administrator. She served as president of Hunter College of the City University of New York from 1980 to 1987 and as chancellor of the University of Wisconsin-Madison from 1987 to 1993.

In 1993, President Bill Clinton appointed her U.S. Secretary of Health and Human Services (HHS) where she served for eight years, becoming the longest serving HHS Secretary in U.S. history. At the end of her tenure, an article in The Washington Post described her as “one of the most successful government managers of modern times.”

In 2007, President George W. Bush handpicked Shalala to co-chair with Senator Bob Dole the Commission on Care for Returning Wounded Warriors, to evaluate how wounded service members transition from active duty to civilian society. In 2018, she was elected to represent Florida’s Twenty-Seventh Congressional District, where she served through the end of 2020.